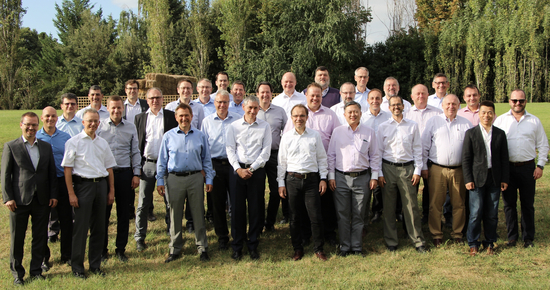 The executives of LAUDA DR. R. WOBSER GMBH & CO. KG together with the responsible persons of the LAUDA foreign companies at this year's World Jour Fixe in Terrassa near Barcelona, Spain.

For the sixth time, the international LAUDA World Jour Fixe took place. Once a year, this management meeting brings together the managing directors of the twelve foreign subsidiaries with the management of the LAUDA DR. R. WOBSER GMBH & CO. KG. For the first time, the international meeting was not carried out in the middle of the year at the headquarters in Lauda-Königshofen, but at the beginning of autumn in Terrassa near Barcelona, Spain. The reason for the layover was the first, interactive preparation of the sales plan for the following year. In addition, the Spanish subsidiary LAUDA Ultracool celebrated its 50th anniversary this year.

The annual World Jour Fixe serves - in addition to an outlook on current business developments - the comprehensive exchange of overarching projects, goals and plans of all LAUDA companies operating on the world market. This time, lectures and workshops on "Innovation and Idea Management" were on the extensive agenda. For the first time, the sales planning for the various business units of LAUDA and LAUDA Scientific was worked out in one place in different small groups.