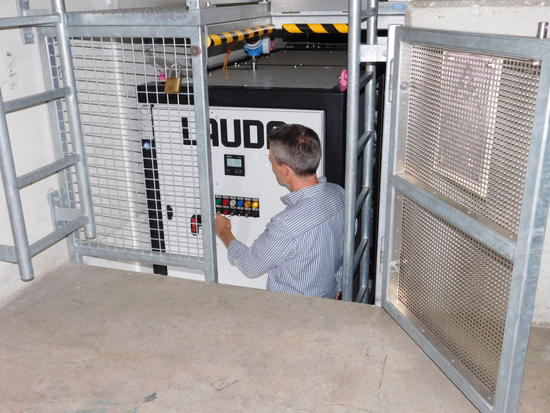 The LAUDA heat transfer system ITH 250 will be used in the basic research of nuclear fusion of the Max Planck Institute for Plasma Physics in Garching. The LAUDA plant is placed in the basement of the fusion power plant. 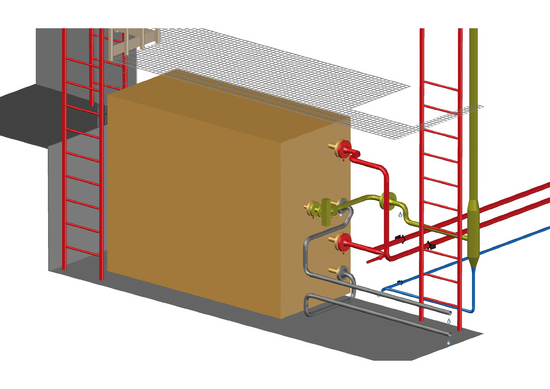 Representations in 3D simplified communication with respect to formation planning and maintenance.

LAUDA Heating and Cooling Systems has received a special type of order from Max-Planck-Institute of Plasma Physics. The Institute of Garching, which is engaged in the basic research for fusion power plants, plans for a future power plant to allow hydrogen atoms to fuse into helium - a similar process as produces solar energy. For the temperature control of tungsten bricks, which are needed as an energy absorber in diverters of fusion reactors, the temperature specialist LAUDA was commissioned to develop a heat transfer system for use at the ASDEX Upgrade [Axially Symmetric Diverter Experiment] experiment in Garching. The unusual thing about this system: The heat carrier used is fully de-ionized (DI) water, and the temperature range of the system is between 20 and 230 °C - which requires a resistance to high pressures. This requirement had to be carefully considered in the planning of all components in regard to materials and properties.

A significant advantage of LAUDA heat transfer units of the ITH series lies in their modularity. The system consists of replaceable individual components such as radiators, circulation pumps, expansion tanks, and additional heat exchanger modules. For system, as an example, a tubular heat exchanger was used. The air flowing through the cylinder medium is at 20 °C here; the hot water flowing through the pipes is up to 230 °C. A further technical challenge was the need for the components to resist the high nominal pressure of PN 63. For example, the pump has to compensate for high pressure drops in the system at a lifting height of 175 meters at 20 °C. There are three different operating modes: The high pressure region works with 32 bar in the temperature range of 20 to 230 °C. Low pressure of 10 bar is possible in the range of 20 to 150 °C. Each circuit is monitored with various safety components. A third possibility is a cold-drive without pressure in the temperature range of 20 to 70 °C. This mode is necessary for filling of the system and for complete water deionization as well.

The open communication between the Max-Planck-Institute and LAUDA was of particular importance, due to the specific technical requirements. An illustration of the complex system in 3D simplified communication enormously in terms of plant layout and future maintenance. Before delivery, the system was tested in the LAUDA test area in the presence of the customer. Included in the scope is the functional testing of all components and settings, heat carrier pressure and leakage tests, cabinet tests, and control accuracy. During the FAT (Factory Acceptance Test), a first test was carried out successfully, directly according to customer parameters.