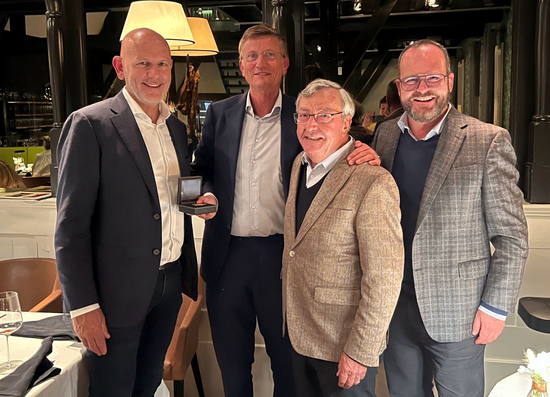 Image: The Managing Directors of Beun de Ronde, Corné Reuvers and Mike Klinkenberg, with Dr. Gerhard Wobser and the President & CEO of LAUDA, Dr. Gunther Wobser (from left to right)

The Dutch laboratory dealer Beun de Ronde B.V., a provider of scientific equipment with an impressive history going back 100 years, has been one of LAUDA DR. R. WOBSER GMBH & CO. KG.’s most reliable partners for decades. Since 1958, the two family companies have worked together without . Beun de Ronde was LAUDA’s first agency abroad, meaning it has been at the world market leader’s side almost from the very beginning. After the death of the two company founders Beun and de Ronde, their long-standing, trusted colleague Joop Klinkenberg took over the shares and the company management, which he later passed down to his son Mike. To honor this extraordinary and close partnership, the current Managing Director Mike Klinkenberg has been awarded the Dr. Rudolf Wobser Medal. At a celebratory dinner at the company headquarters near Amsterdam, the President & CEO of LAUDA, Dr. Gunther Wobser, presented the award in the presence of his father, Advisor and Shareholder, Dr. Gerhard Wobser, and the Managing Director of Beun de Ronde, Corné Reuvers.

Dr. Gunther Wobser handed over the medal in person. This time, the occasion was a first: “The relationship between LAUDA and Beun de Ronde is a very special one, because it was the first agency that LAUDA signed a contract with on August 15th, 1958. The collaboration goes back even further, as company founder Dr. Rudolf Wobser knew Jan de Ronde from his previous work. Especially in the early days of our company, Beun de Ronde played a significant role in our success, for which I would like to thank him on behalf of everyone involved. To this day, our partnership is the foundation of our shared economic success and can undoubtedly be regarded as a shining example of an international, neighborly collaboration between two family companies.”

The Dr. Rudolf Wobser Medal, which is made of real gold, was created for the occasion of the 60th company anniversary in 2016 and is awarded to individuals who have made an extraordinary contribution to the family company. For example, employees who have belonged to the company for over 50 years are honored with the award. In total, 16 Dr. Rudolf Wobser Medals have been awarded. Mike Klinkenberg will be the first person outside the company and outside Germany to receive this distinguished accolade.