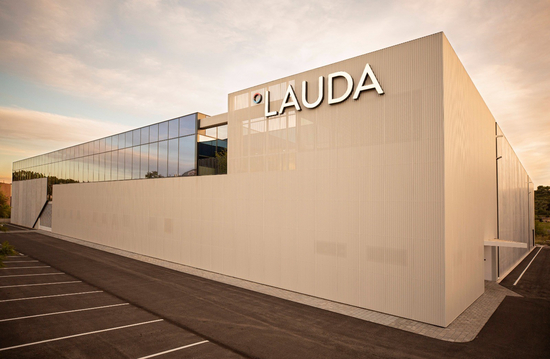 The Spanish subsidiary of LAUDA DR. R. WOBSER GMBH & CO. KG, LAUDA Ultracool, SL, has officially inaugurated its new production site with a celebratory ceremony in Terrassa, near Barcelona. In doing so, the temperature control specialist has successfully completed its first construction project abroad – and its first greenfield construction of an entire production facility. The family company has invested around seven million euros in the new-build in Spain, and created around 4,000 m² of new production areas and almost 1,000 m² of office space on the 9,000 m² site. As a result, the Spanish subsidiary has doubled its production capacities for LAUDA Ultracool circulation chillers, to meet growing demand worldwide for energy-efficient industrial cooling. The expansion of Spanish subsidiary is strategically aligned with the ambitious Drive250 strategy project, with which the world market leader aims to more than double its revenue within five years.

Along with the workforce and the Managing Director of LAUDA Ultracool, Xavier Armengol, the festivities were attended by high-ranking representatives from Germany, including President & CEO Dr. Gunther Wobser and his father Gerhard Wobser, as well as Managing Directors Dr. Marc Stricker and Dr. Mario Englert. Regional representatives including the Mayor of Terrassa Jordi Ballart and Deputy Mayor Núria Marin, and Patrick Heinz, the Deputy Consul General of the German Consulate General in Barcelona, also took part in the event. In their speeches, Ramon Talàmas, President of the Terrassa Chamber of Commerce, and Joan Romero, Representative of the Catalonian Government and CEO of ACCIO, an organization to ensure the competitiveness of Catalonian businesses, as well as Antoni Abad, President of the CECOT Entrepreneurs’ Association, praised the contribution and commitment of the world market leader LAUDA to the burgeoning economic region of Catalonia.

“In recent years, LAUDA Ultracool has grown steadily and successfully positioned itself on the market with modern, energy-efficient circulation chillers,” said Dr. Marc Stricker, summarizing the developments of the last few years. “The new build will create urgently needed capacities for our biggest overseas subsidiary, both in production and for the further expansion of the product line. Accordingly, this important investment is perfectly in line with our Drive250 growth strategy.”

“Like in 2011, when we acquired the Spanish subsidiary, we are showing courage and investing during difficult times,” remarked Dr. Gunther Wobser during his festive speech. “That’s why it is all the more important that we as a company send a visible signal of confidence and determination. By doing so, we can write our success story together.”