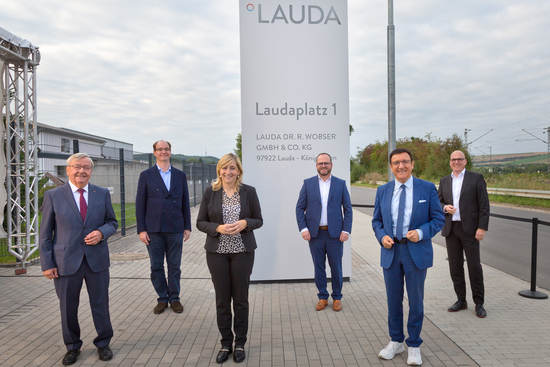 LAUDA DR. R. WOBSER GMBH & CO. KG celebrated the inauguration of the new Laudaplatz (Lauda Square) with a celebratory ceremony in front of the gates of its head office in Lauda-Königshofen. The open-air inauguration ceremony was attended by the company management, partners and the management group, along with important political representatives, namely Mayor Dr. Lukas Braun, Member of the Landestag Prof. Dr. Wolfgang Reinhart, and Member of the Bundestag Nina Warken. In total, around 50 guests were present at the ceremony, which was compliant with coronavirus restrictions. From now on, LAUDA can be found at the new address, Laudaplatz 1.

“Our company is 65 years old, and for 65 years, Pfarrstrasse was our home.” With these words, Dr. Gunther Wobser, Managing Director of LAUDA, opened his ceremonial speech for the historic change of company address. Laudaplatz 1 befits both company’s status as a global market leader in temperature control technology and the company’s connection with the region and the town of Lauda-Königshofen. The family company will also remain open to the general public: “We have created a representative, public space that invites cyclists, athletes and passers-by to stay a while.” The new Laudaplatz is a “fine new address for an expanding family company,” declared Dr. Gunther Wobser.

Words of praise from politicians

Prof. Dr. Wolfgang Reinhart, Member of the Landestag (State Parliament) and Vice President of the Baden-Württemberg Landestag, praised the cosmopolitan and locally connected outlook of the company. At the same time, he spoke highly of the extraordinary contribution of medium-sized companies to the German economy. Member of the Bundestag (Federal Parliament) Nina Warken was also present for the inauguration of Laudaplatz 1. “The new address reflects the deep connection between Lauda-Königshofen and LAUDA,” said Nina Warken in her laudatory speech. “As a world market leader, LAUDA has made an important contribution during the pandemic, both in Germany and internationally,” remarked the politician, looking back on the past year. She praised the varied social commitments of the company and highlighted the lifetime achievements of Dr. Gerhard Wobser, the former Managing Director, who also attended the inauguration as a guest. In reference to the new address, Nina Warken ended her admirable speech with “Nomen est nomen”. For the inauguration, the mayor of Lauda-Königshofen, Dr. Lukas Braun, handed over the official street sign with the new address to Dr. Gunther Wobser. The town is proud of LAUDA, said Dr. Lukas Braun: “Many congratulations on this successful christening.”