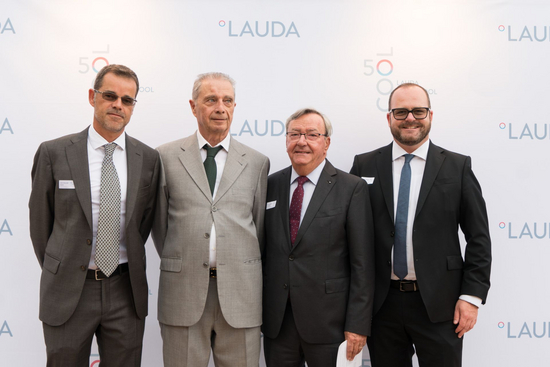 LAUDA, global market leader in precision temperature control, held a festive gala evening to celebrate the 50th anniversary of its Spanish foreign subsidiary LAUDA Ultracool. Specializing in the production of industrial circulation chillers, the company has been a member of the Lauda Group since the start of 2011. Founded on 24 September 1968 in Terrassa, Spain under the name CHAUMECA IBERICA, S.A., the company can look back on an eventful history.

The chillers from the CHAUMECA IBERICA product portfolio were further developed over the years while their economic importance continued to increase. In 1993, the company therefore began to manufacture water-cooled constant temperature equipment in a range of 22 different models with power ratings up to 230 kW. On 3 January 1999, the German company Ultrafilter GmbH took over the Spanish machine builder. CHAUMECA IBERICA S.A. then became Ultrafilter, S.A. and a member of the Ultrafilter Group. After the takeover, the company focused entirely on the development and manufacture of circulation chillers in Terrassa. The CRIA-N brand then became ULTRACOOL. At this point in time, the Spanish company was already selling its products worldwide.

In 2003, the company was taken over a second time by Donaldson Filtration Solutions, an American multinational group of companies employing roughly 12,000 staff worldwide. Under the direction of Donaldson, the Terrassa-based company expanded the ULTRACOOL line to a maximum cooling output of 450 kW. Following a series of modernization measures, production capacity had increased to 2,000 units per year. In 2010, the Donaldson Group decided to restructure its European operations and concentrate on the manufacture of industrial filters, which made up its core business. The new buyer was LAUDA DR. R. WOBSER and so the Spanish subsidiary LAUDA Ultracool was born. Within a very short time, the Spanish employees became established members of the LAUDA family and the circulation chillers were a valuable addition to the LAUDA temperature control portfolio. LAUDA presented the most recent further development in the Ultracool line to the global public for the first time at this year’s ACHEMA exhibition. It includes completely new, efficient models that can establish an innovative cloud connection to the local control and monitoring system.

At the end of September 2018, the 50th anniversary of LAUDA Ultracool was fittingly celebrated at the site of the Spanish subsidiary. The entire international LAUDA Group management team attended the gala evening, including Executive Director Dr. Gunther Wobser and his father Dr. Gerhard Wobser as well as Managing Directors Dr. Marc Stricker and Dr. Mario Englert from company headquarters. The former founder of CHAUMECA IBERICA, Xavier Escudé Gonzalez, the mayor of Terrassa, Alfredo Vega López, and the president of the employer’s association, Antoni Abad were also among the guests. During his eulogy, Dr. Gunther Wobser recounted the intensive impressions that the acquisition of LAUDA Ultracool had made during the economic crisis that was happening at the time. Impressed by the cleverly designed constant temperature equipment, the modern production plants and the team of staff, he finally signed the contracts for the takeover on 21 January 2011 after a sleepless night.

“LAUDA Ultracool is an impressive success story, especially when you consider that Spain was entrenched in a crippling economic crisis at the time”, explained Dr. Gunther Wobser proudly. “Today, LAUDA Ultracool is our largest overseas subsidiary and a profitable company with a significant, steady turnover. It is also closely integrated in the international LAUDA family“, explains Dr. Gunther Wobser.