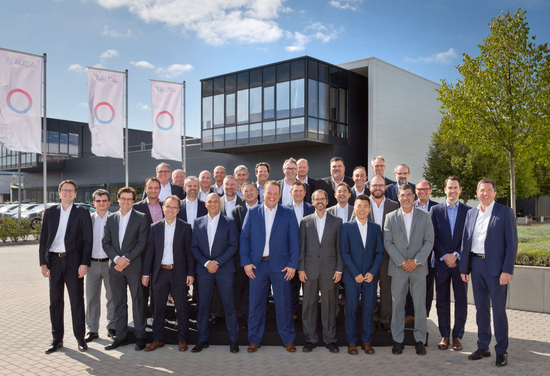 LAUDA’s international leaders gather each year to exchange ideas and for next year’s strategic planning. In 2019, the World Jour Fixe once again took place at headquarters in Lauda-Königshofen.

The LAUDA international leadership team completed a week of intensive work, constructive discussion, and strategic decision-making. This was the annual World Jour Fixe, where the managing directors of all the twelve foreign businesses gather to meet with the leadership group of LAUDA DR. R. WOBSER GMBH & CO. KG. This event took place for the seventh time, and, after Barcelona, was back in its traditional headquarters in Lauda-Königshofen.

The aim of the meeting of international leaders is the direct and intensive exchange of information about collaborative projects and the strategic goals of all the LAUDA companies active on the global market. Global strategies were on the agenda alongside an extensive view of the development of the individual business sectors and the planning for the following year. Consistent customer orientation of the international sales and marketing logistics of the global market leader were discussed under the label of GOAL (Global Ordering and Logistics). An additional item at the forefront of this year’s event was the advancing integration of the GFL Gesellschaft für Labortechnik mbH, which was acquired by LAUDA at the end of last year.

The direct exchange between all participants is a significant factor for the company culture of LAUDA. For this reason, the annual World Jour Fixe has a constant entry in LAUDA’s diary. President and CEO, Dr. Gunther Wobser says: “The international meeting reinforces the trust and collaboration between the worldwide LAUDA companies. This year the feedback was staggering and our route to becoming a global company was confirmed” In addition to digitalization, the healthy growth of the company benefited markedly from “intensive personal communication at the level of equals”.

In addition to the strategic tasks, the collegial interchange amongst the participants did not miss out, for example, there was a visit to the Königshöfer Fair and a joint tour of the Marienburg Castle in the neighboring university city of Würzburg.