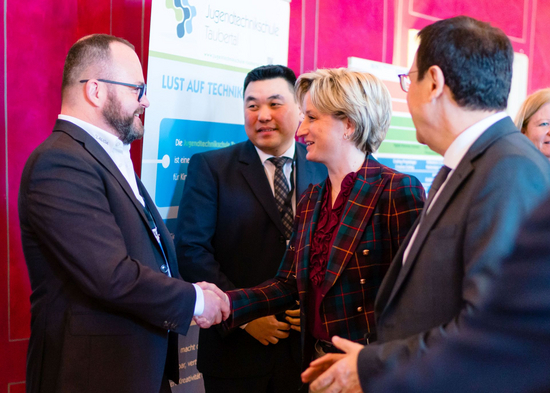 The CEO and President of LAUDA, Dr. Gunther Wobser (l.), welcomes the Minister of Economic Affairs of the State of Baden-Württemberg, Dr. Nicole Hoffmeister-Kraut, together with Campus Director Prof. Dr. Kim (2nd from left) and the Chairman of the CDU faction in the State Parliament, Prof. Dr. Wolfgang Reinhart (r.) (Source: Ludmilla Par-syak Photography / Fraunhofer IAO)

With a "Everyday view of digitisation at LAUDA", the President and CEO of LAUDA, Dr. Gunther Wobser, opened the series of lectures at the action day "Digitisation and sustainability for BW and worldwide" with a keynote speech on 10 February. The action day is part of the 6th "Po-pup Laboratory BW", a digitisation project of the state of Baden-Württemberg. The aim of the Po-pup Lab BW is to give small and medium-sized companies in the state an understanding of innovative technologies or business models and to provide concrete recommendations for action on the basis of workshops or best practice examples.

Components of the digital strategy of the world market leader

In his presentation to representatives from politics and business, Dr. Wobser pointed out the great importance of digitization in the industry. The exponentially increasing technical development, e.g. Moore's Law of Computer Performance, stands in contrast to the linear human adaptability. As a result, new companies with disruptive forces are increasingly pushing into the market. LAUDA meets this challenge, among other things, through strategic cooperation with start-ups such as ENER-IQ, Coolar and watttron, according to Dr. Wobser. LAUDA's own LAUDA innovation laboratory in Silicon Valley and the Digital Agenda, which is aligned with the corporate strategy, are further components of LAUDA's digital strategy.

At the end of his keynote speech, Dr. Wobser addressed the political community with forceful words: The Main-Tauber-Kreis is in the final group of districts in terms of innovative ability, ranking 39th out of 44, and the trend is downward. Further active support is required, for example in the expansion of the Baden-Württemberg Cooperative State University Mosbach with the Bad Mergentheim campus as "anchor point of digitalisation". Dr. Wobser criticized that too often, medium-sized companies have to carry out complex digitization projects with their own resources without the support of the state and immediately reduce the results as an investment.

At the LAUDA stand, the Minister of Economic Affairs of the State of Baden-Württemberg, Dr. Nicole Hoffmeister-Kraut, accompanied by Campus Director Prof. Dr. Kim and the Chairman of the CDU faction in the State Parliament, Prof. Dr. Wolfgang Reinhart, were able to gain an impression of two digital projects of LAUDA. The family business thus demonstrated a practical application of virtual reality with the LAUDA showroom. LAUDA also demonstrated the connection of the industrial recirculating chillers to its own LAUDA Cloud including data visualisation via a tablet. This enables users to check the device status at any time, regardless of location, and also to change parameters directly.