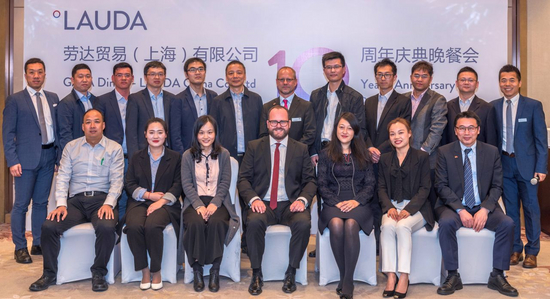 Ten years LAUDA China: The President and CEO of LAUDA, Dr. Gunther Wobser (middle, front) celebrated together with the staff of the sales subsidiary in Shanghai.

After celebrations in Spain (50 years LAUDA Ultracool) and in the USA (ten years LAUDA-Brinkmann) LAUDA celebrates another anniversary. More than ten years ago, on April 8, 2008, the distribution company LAUDA China Co., Ltd. was founded in Shanghai. This was preceded by a strategy project by the manufacturer of high-quality temperature control units in order to optimally support the Asian-based customers and representations. The five-strong team initially worked closely with other agencies to expand LAUDA's sales across the Asian market. In addition to the technical advice, the marketing of the LAUDA Alpha device line, which was especially designed for the Asian market at that time, was one of the main tasks of the sales subsidiary in cooperation with the large Chinese dealer network.

Customers from pharma to electromobility

Over the past ten years, LAUDA China has built a network of strong reference customers in areas such as pharmaceuticals, automotive and biotechnology, and has built an excellent reputation in these industries, explains General Manager Michael Lin, who has been involved from the very beginning and who leads LAUDA CHINA since December 2009. Its most important customers include the global pharmaceutical, biopharmaceutical and medical device company Wuxi Apptec, the electric mobility pioneer Siemens Valeo and Merck Millipore from the life sciences sector. »The last ten years have been a great success for LAUDA China. Thanks to our local presence, we were able to directly support our customers in China with service and sales services«, continues Michael Lin.

The celebrations of the tenth anniversary included the CEO and President, Dr. Gunther Wobser, who had flown in from the german headquarters. He emphasized the importance of the foreign location in Shanghai and the success of the decentralized management of LAUDA's global sales activities. »The founding of LAUDA China was an important step in our strategy at the time«, Dr. Gunther Wobser said in his speech at the anniversary. »China is a focus of our activities. With the double presence of both a sales and a development and production subsidiary, we clearly show our commitment as the world market leader.«