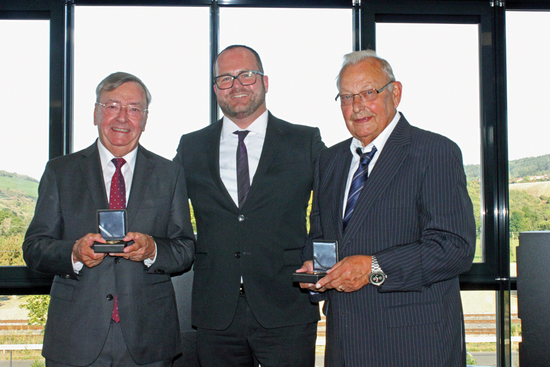 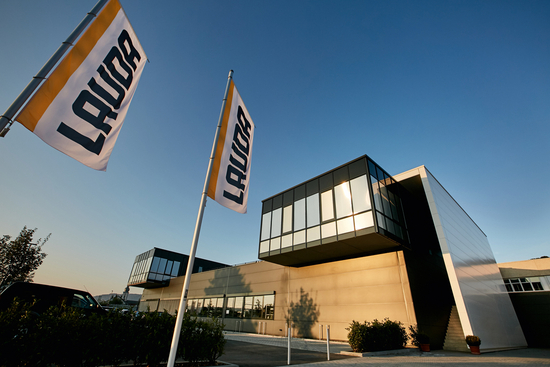 The need for office space at LAUDA has greatly increased in recent years.

There were two occasions at LAUDA DR. R. WOBSER GMBH & CO KG in Lauda-Königshofen last Wednesday afternoon at a festive event with a large number of honored guests. On the one hand, a new administration building with offices and conference rooms could be officially opened a mere six months and a few days since the cornerstone was laid at the beginning of March and, on the other hand, the official ceremony formed part of the celebrations to commemorate the company's 60th anniversary.

"We are celebrating 60 years of successful company history. With the dedication of our new office and meeting rooms we are also working to shape our future. To me maintaining a balance between Honoring the achievements up to now while keeping an eye on the future at the same time," emphasized President & CEO Dr. Gunther Wobser, who was able to welcome a large number of honored guests from business, community and politics. They included such guests as MdB Nina Warken, MdB Alois Gerig, Landrat Reinhard Frank, Bürgermeister Thomas Maertens, Dr. Harald Unkelbach, President of IHK Heilbronn-Franconia, the two executive chairmen of Sparkasse Tauberfranken, Peter Vogel and Wolfgang Reiner, Architect Klaus Schreiner, the managing directors of the Faul and Bethäuser construction company, Herbert Bethäuser and Norbert Groß, former LAUDA managing director and current advisor and shareholder Dr. Gerhard Wobser, former managing director Karlheinz Wobser and shareholder Christine Koschker.

The six-decades of company history did not just have highly successful phases, but it also had difficult ones, admitted Dr. Gunther Wobser. The company faced a crisis in the 1990s due to high investments and dwindling sales. "This experience has humbled us," he emphasized. For this reason, the company has been pursuing the "STEP" site development program for the past ten years, which LAUDA is implementing to modernize step-by-step from the inside out. This includes the now completed new construction, with which the existing administration wing is being expanded by the addition of floors to the production hall built in 2013.

LAUDA is more than just a business enterprise, however; it is also committed to art, emphasized Dr. Gunther Wobser. A total of 124 art exhibits have been put on display since 1995. As a highlight, the president & CEO referred to an exhibit of the internationally renowned Professor Ben Willikens, whom he was also able to welcome to the festive event as an honored guest.

"What does the year 1956 mean to you? was one of the themes based on LAUDA's founding year, which was included in a round of podium discussions with Warken, Gerig, Maertens, Unkelbach and Dr. Gerhard Wobser. "LAUDA is an important part of the hometown and business history of this city and region," emphasized Maertens as an example in the discussion round moderated by Michael Dickescheid, Head of Marketing and Communication at LAUDA.

Unkelbach then awarded an honorary certificate of the Chamber of Commerce and Industry (IHK) to Dr. Gunther Wobser on the occasion of the anniversary and for the company's special commitment to the economy. Maertens also presented an art gift to Wobser on behalf of the city of Lauda-Königshofen. In turn, Dr. Gerhard Wobser and Karlheinz Wobser were honored by the President & CEO with the first award of the Golden Dr.-Rudolf-Wobser medal, dedicated to the company founder, for their special services in the ongoing expansion of the company, which they took over in 1977, after the sudden death of their company founder and father.

"The sphere of architecture emerges wherever technology is genuinely fulfilled", said architect Klaus Schreiner, quoting the famous architect Mies van der Rohe, since his belief according to this quote applies perfectly to the new LAUDA office building. Schreiner mentioned the construction of around 4000 cubic meters of converted space, and the installation of 38 tons of steel components, 800 square meters of concrete flooring, and 850 square meters of glass facade surface with internal solar protection as examples of the building's technical data.

Towards the end of the festivities, the new building wing was formally blessed by the two clergymen Stefan Märkl and Volker Lenz. "I am proud to be able to be here at LAUDA", emphasized Dr. Marc Stricker in his closing words.

The festive event was musically framed by the fascinating and enthralling beat-boxing, sound effects and vocal acrobatics of "Robeat“" alias Robert Wolf from Stuttgart.

Following the celebration, LAUDA officially opened its third "Worldmeeting" in the Lauda vineyard on Wednesday evening with employees from both the headquarters in Lauda and the international LAUDA subsidiaries. As part of this multi-day meeting, the agenda included such activities as a company tour with all of the foreign guests and a large internal celebration of the 60th company anniversary on Thursday evening in the Lauda City Hall.

As a further and final highlight of its 60-year enterprise, LAUDA will be holding an open house on Sunday, 9 October, 2016 from 10 am to 5 pm, to which all interested citizens are invited. A company tour will provide the visitors with insight in the production and working world of the global market leader. The opportunity will also be offered to view the new administration wing with offices and conference rooms.

The LAUDA Group in facts and figures