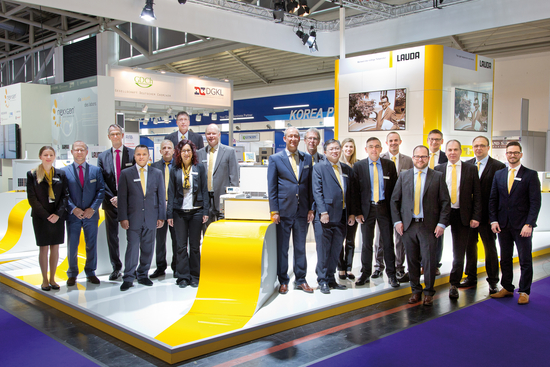 The LAUDA trade show booth at the analytica 2016 show in Munich.

The 25th analytica trade show in Munich was a complete success for LAUDA. The global market leader recorded a more than 30 percent increase of visitor's to its booth this year than two years ago. Analytica is the leading international trade show for the lab technology, analytics and biotechnology industry. The overall number of visitors to the trade show remained the same.

LAUDA specializes in temperature control technology and showcased, across its roughly 110 square meter booth, the new bath and circulation thermostats from the LAUDA PRO product line as well as the LAUDA Loop, a thermo-electric circulation thermostat based on energy-efficient Peltier technology. To truly do justice to its innovations and its application potential, rotating presentation screens and special lighting effects were used. The company’s subsidiary LAUDA Scientific was also represented for the first time at analytica with its own booth. There, it unveiled a new and innovative measuring instrument that’s attracting a lot of attention.

“The constant crowd of visitors at the booth during all four days of the trade show demonstrated impressively that through our pioneering spirit in instrument development, we can inspire our industry visitors again and again, especially in this 60th anniversary year since our founding. In addition to the high number of visitors to our booth, even the quality of the conversations that took place was a clear indication that we are well-positioned for the future in terms of our instrument product lines,” says Dr. Gunther Wobser, President and CEO of LAUDA.