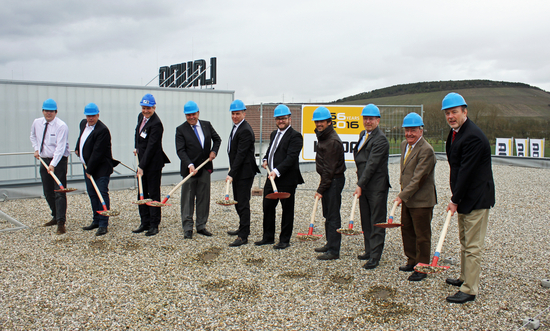 There were two occasions for particular enjoyment at LAUDA in just one week. After the company was able to celebrate its 60-year existence with the entire staff on March 1, 2016, a groundbreaking ceremony followed two days later for a new administration building with offices and conference rooms.

The new construction expands on the existing administrative wing by adding on to the production hall which was newly built in 2013. "The groundbreaking and expansion must be seen in the context of our own site development program "STEP", explained President & CEO Dr. Gunther Wobser and COO Dr. Marc Stricker on the occasion of the official groundbreaking ceremony attended by a large number of invited guests, including Mayor Thomas Maertens, Architect Klaus Schreiner, the Managing Directors of the Faul und Bethäuser construction company, Herbert Bethäuser and Norbert Groß, Elmar Löffler, Regional Director of Sparkasse Tauberfranken, and LAUDA Advisor and Shareholder Dr. Gerhard Wobser and Shareholder Christine Koschker.

LAUDA has been using "STEP" to gradually modernize from the inside out for around ten years already. This has included such things as a reorganization of the logistics and production processes of high-quality devices and systems to enable the company to remain a world market leader at optimal costs in the future. As a first step, a newly built production hall for heating and cooling systems was officially opened in September, 2008. Following the strengthening of pre-existing areas, particularly the premises of the former powder coating system, the next step was the construction of a new logistics center and the new "B 11" production hall, including a connecting structure between them, completed from December 2011 to December 2013 on a surface area totaling around 2800 square meters.

"We have considered again and again just how boldly we should build", continues Dr. Gunther Wobser. More than ten million euros were invested in the course of a decade for the aforementioned "STEP" actions. The company is increasingly facing cramped conditions with the future new construction of offices and meeting and seminar rooms. "Innovative ideas and creativity require a pleasant and suitable atmosphere", explains the President & CEO with confidence. In addition to this, a laboratory is being set up in the building to enable such activities as the presentation of current new developments and innovations to customers. The new construction project also completed the final "STEP" action. In summary, Dr. Gunther Wobser emphasizes "With our development program in the past ten years, we have already set the pace for a continuing modern, efficient, and sustainable company site in Lauda-Königshofen."

According to Dr. Gunther Wobser in consultation with the architect and the contracted construction company, the architecturally attractive new construction with two building units on the roof of production hall "B11" is set for completion by September 2016. "Just in time for the official large celebration of our 60-year company anniversary in mid September and for our Open House for the public in October", pointed out the President & CEO with optimism, especially since the planning by Architect Schreiner has already been completed and the required building permits from the city of Lauda-Königshofen obtained. At the same time, Dr. Gunther Wobser thanked all of the players of participating companies, the city, and the company shareholders for their excellent and efficient collaboration.

"When LAUDA builds, this is a very important event for the city of Lauda-Königshofen", states Mayor Thomas Maertens with pleasure. "Those who invest so boldly demonstrate their confidence in the future", additionally emphasizes the Mayor. Concurring with Dr. Gunther Wobser, he also pointed out that the time for building investments is very favorable due to the continuing low interest rates. The fact that the Heilbronn-Franconia region is among the particularly dynamic and successful regions in Baden-Württemberg, can be particularly attributed to the many growing mid-sized companies and world market leaders such as Lauda. "We congratulate you on this decision and are proud to have this company in our city," emphasized Maertens in conclusion.