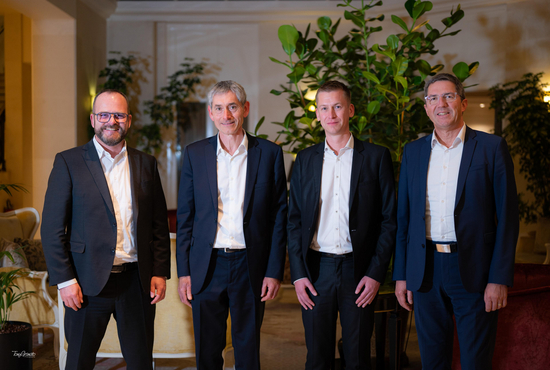 The long-standing head and Managing Director of LAUDA France S.A.R.L., Eric Couche, is the first overseas employee of LAUDA DR. R. WOBSER GMBH & CO. KG to be awarded the Dr. Rudolf Wobser Medal for his outstanding performance during his 17 years of service at LAUDA. Eric Couche has managed the foreign subsidiary since it was founded on March 1, 2005, and will retire at the start of next year. To present the Dr. Rudolf Wobser Medal and say farewell to the longstanding colleague in the festive setting of the Château Mont Royal in Chantilly, near Paris, the President & CEO Dr. Gunther Wobser traveled to France for the occasion, together with his wife and the Managing Director for international sales, Dr. Ralf Hermann. The entire team at LAUDA France took part in the celebratory evening.

LAUDA France was founded on March 1, 2005, in Neuilly-sur-Seine – starting with Sales Director Eric Couche as its only employee and an annual turnover of 1.5 million euros. LAUDA France was not only the first subsidiary outside Germany; Eric Couche was also the first overseas LAUDA employee. “I am very thankful for Eric Couche’s contribution and his exceptional work in building up our first foreign subsidiary. The development of LAUDA France has been positively shaped by his reliability and enterprise,” remarked Dr. Gunther Wobser, during his address. Today, the company of ten employees serves key customers in sectors such as pharma or automotive, and expects to generate almost five million euros in revenue in 2023. “That is an amazing achievement,” said the President & CEO in recognition. Maxime Sabre, who has worked for LAUDA France for more than ten years, will succeed Eric Couche as Managing Director of the subsidiary. “Eric Couche and the team at LAUDA France have made a huge contribution to LAUDA's success. I wish him all the best.”

The Dr. Rudolf Wobser Medal, which is made of real gold, was created for the occasion of the 60th company anniversary in 2016 and is awarded to individuals who have made an extraordinary contribution to the family company. Eric Couche is the first overseas employee to be honored with the medal.