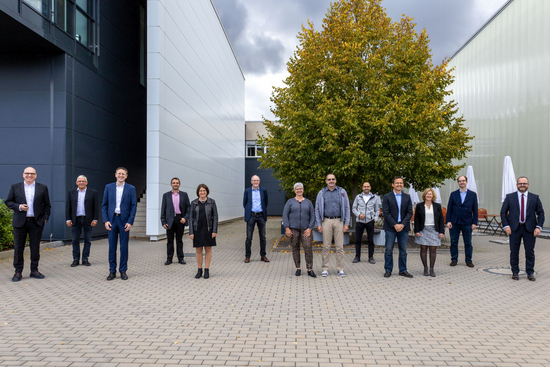 For the second time this year, LAUDA DR. R. WOBSER GMBH & CO. KG was able to host a traditional ceremony. Three employees were honored for 40 years of service at LAUDA. Sonja Hörner-Dürr, Peter Spitznagel and Peter Wiltschek all began their training at LAUDA on August 24, 1981. In addition to the general management and the LAUDA management team, the congratulators included colleagues and companions of the employees as well as the mayor of the city of Lauda-Königshofen, Dr. Lukas Braun.

Sonja Hörner-Dürr, born in Bad Mergentheim in 1964, began her training as an office administrator at LAUDA in 1981. Since then, with brief interruptions in accounting and order processing, she has found her professional home in order processing. Since April 16, 1997, she has been working there as a department manager. From there, she masters the demanding tasks and challenges of customs and foreign trade with precision, knowledge and the necessary bite. Ms. Hörner-Dürr has thus taken on "incredibly important tasks for which I personally have a great deal of respect," explained Dr. Gunther Wobser, President and CEO of LAUDA, in his laudatory speech.

Peter Spitznagel started his career in 1981 with a combined apprenticeship as an electrical appliance mechanic and energy appliance electronics technician, which he successfully completed in 1985. Peter Spitznagel initially found his place at LAUDA in electrical assembly before moving to the electronics laboratory of the Research & Development division in January 1997, where he still works today. There, according to Dr. Gunther Wobser, he was "heavily involved in the creation of new devices" and "had his finger on the pulse of LAUDA's technical development", for example by building sample circuit boards. Peter Spitznagel was also regularly on hand at national and international trade fairs to provide expert support in setting up and commissioning the new temperature control units and systems. This required flexibility and resilience, Dr. Gunther Wobser attested to the jubilarian.

The third person to celebrate, Peter Wiltschek, also began his training in 1981. As a mechanic, he first worked in test construction, later in special equipment construction and in the large refrigeration department, before taking over the assembly of hypothermia equipment in February 2003. Since 2007, Peter Wiltschek has been the group leader for hypothermia equipment assembly, where special temperature control units for use during operations are manufactured for a major medical equipment manufacturer. With a keen eye for quality and a great deal of passion for his work, Peter Wiltschek has been meeting the particularly demanding, strictly regulated requirements of medical device production for years, said Dr. Gunther Wobser. After his speech, Dr. Gunther Wobser presented the three jubilarians with LAUDA's certificate of honor and thanked them for their many years of service.

As a welcome guest of honor and representative of the city, the mayor of Lauda-Königshofen, Dr. Lukas Braun, delivered words of greeting and the honorary certificate from the state of Baden-Württemberg, signed by Minister President Winfried Kretschmann. "The frequency of LAUDA's long-standing honors is impressive," stated Dr. Lukas Braun. The fact that entire family cohorts complete their careers at LAUDA is unique in the region, he said. "LAUDA is an anchor of stability for the business location." A long length of service is also a sign that employees feel very much at home in the region, Dr. Lukas Braun emphasized. Addressing the jubilarians, he said, "You have been a part of the wine town of Lauda-Königshofen for 40 years. As a result, you have helped shape the success of the world market leader."

Companions and colleagues also took the opportunity to congratulate the three employees on their jubilee and to pay tribute to them in personal words. Finally, Elmar Mohr, Chairman of the Works Council, expressed his thanks on behalf of the workforce. In return, the honored Sonja Hörner-Dürr spoke words of thanks in the direction of Dr. Gun-ther Wobser and extended these to his father, the former CEO and President, Dr. Gerhard Wobser. She concluded: "LAUDA is one of the top employers in the region and offers secure employment. That is certainly not something that can be taken for granted."